More about this event:

On August 6, the concert space at the La Jolla Riford library was filled to capacity for a multi-media presentation on Ukrainian music. Dr. Taras Filenko’s unparalleled depth of knowledge dazzled a diverse crowd, as he showcased over 150 slides of rarely seen nineteenth-century photographs, uncovered by decades of research in European and North American archives. This thrilling and often humorous lecture was enhanced by Dr. Filenko’s outstanding piano performances of dramatic pieces written by Ukrainian composers, including Mykola Lysenko, Levko Revutsky, and Yakiv Stepovy.

Dr. Filenko’s principle subject was the life of the prominent Ukrainian composer and thought-leader Mykola Lysenko, whose contributions Dr. Filenko analyzed while completing his dual PhDs at the Kyiv Conservatory and the University of Pittsburgh. The audience was encouraged to listen for the influences of Slavic composers on better known works by Chopin and Liszt, whose compositions echo the tonality of the Ukrainian bandura (a traditional string instrument) and folk choruses.

The event came to a close as Dr. Filenko gracefully donated copies of his book, The World of Mykola Lysenko: Ethnic Identity, Music, and Politics in Nineteenth-Century Ukraine, to guests willing to contribute to a scholarship fund, supporting students studying Ukrainian music throughout Ukraine. The event was sponsored by the San Diego House of Ukraine and active community leaders, including Natalie Gebel, Paul Filenko, and Vira Skop. 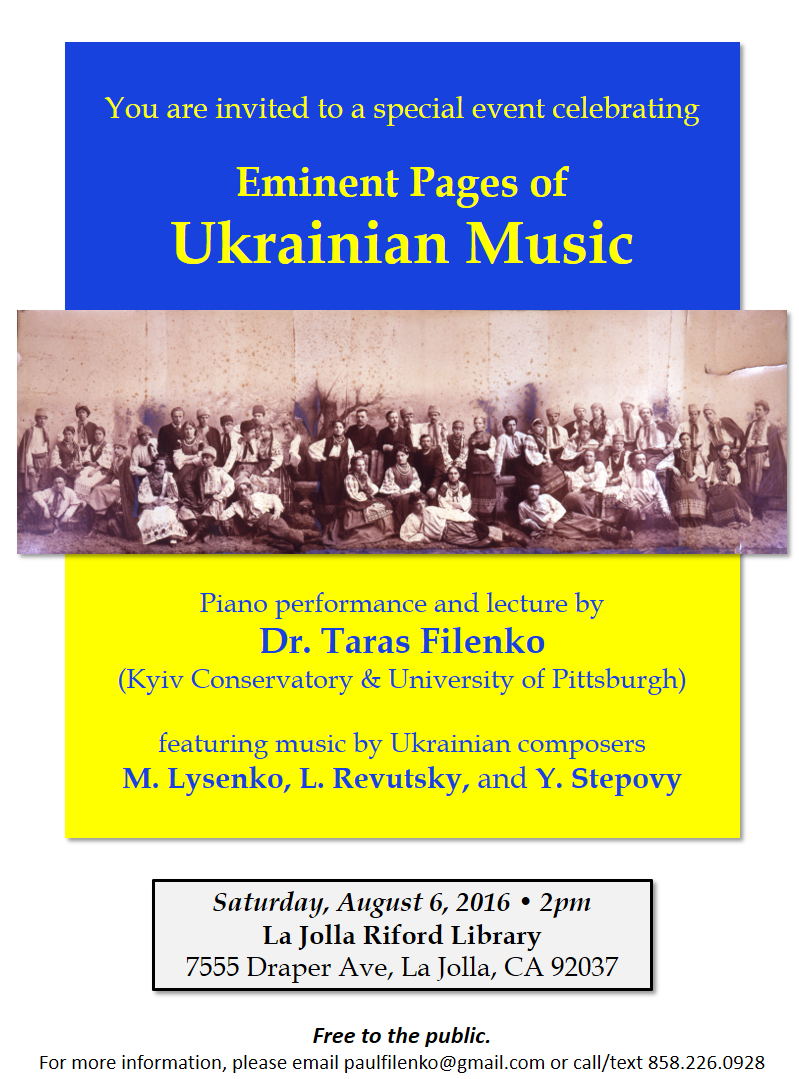 About Taras Filenko:
Dr. Taras Filenko received his degrees at the P. Chaykovsky Conservatory of Kyiv. He studied piano with Yevhen Rzhanov, organ with Arsen Kotlyarevs’ky and musicology with Mykola Hordiychuk. He received his Ph.D. in Ethnomusicology from the University of Pittsburgh and was a recipient of a Fulbright Fellowship in Musicology. Taras Filenko was on the faculty at the Kyiv Conservatory and at the Institute for Ukrainian Studies of the National University. He also lectured at the University of Alberta (Canada), Lafayette College, Rutgers, Harvard, Duquesne Universities, and University of Pittsburgh (USA). He presented papers at scientific conferences in Austria, Azerbaijan, Belgium, France, Russia, Yugoslavia, Ukraine and the USA.

His numerous publications are devoted to the interrelationship between music and poetry, to cross-influences between the musical cultures of Europe, Canada, the U.S., and Ukraine. Many of his works deal with forgotten or prohibited composers of the 19th and 20th centuries, including the disciples of Mykola Lysenko, and are based on newly-discovered archival materials.

Additional information can be found on the following sites:
http://tarasfilenko.com/
https://en.wikipedia.org/wiki/Taras_Filenko

Putting their knowledge and musicological discoveries into The World of Mykola Lysenko:Ethnic Identity, Music, and Politics in Nineteenth-Century Ukraine, the authors Taras Filenko and Tamara Bulat hope that this publication will help to further the understanding of the creativity of the renowned composer Mykola Lysenko in the context of ethnic identity, music, and politics in nineteenth and early twentieth century Ukraine.

This book is devoted to the development of Ukrainian musical culture in the second part of the 19th century. The problems of influence and confluence of ethnic identity, music, and politics are discussed in the context of the Ukrainian cultural milieu. The authors chose the figure of the founder of Ukrainian national school of music, Mykola Lysenko, a composer, music folklorist, pianist, pedagogue and prominent public figure. A recognized leader among Eastern European music folklorists and composers, Lysenko derived his creative inspiration from songs of his native land and was an ardent propagator of Ukrainian folk music.

The book features unique photos of public and, cultural figures, composers, writers, artists, historians and ethnographers. Extensive materials reconstruct a broad panorama of the civic and cultural life of Ukraine at the turn of the 20th century. Much of the material presented is published for the very first time.

The book is intended for the general public, as well as scholars and students who are interested in Eastern European, and Ukrainian studies.