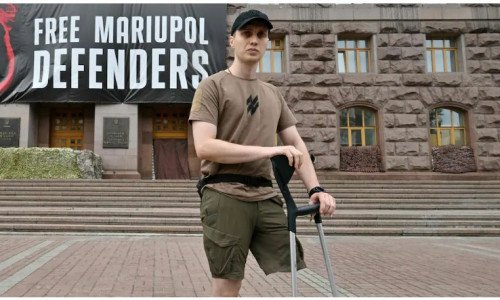 Who: Two Ukrainian soldiers, Artur (call sign Barik) and Vladyslav (call sign Wikipedia), were released from Russian captivity in a prisoner of war (POW) exchange in June 2022. Artur and Vladyslav were among those who were forced to surrender after they had fended off the Russian Army for three months from the last stronghold in the city, an underground network of bunkers at the Azovstal Steel Plant.

What: At multiple events this weekend, organized by the House of Ukraine, Artur and Vladyslav will recount their experience fighting off the Russian Army from the Azovstal Steel Plant. By diverting Russian forces from attacking other parts of Ukraine, the brave three-month-long defense of Azovstal helped Ukraine push the Russian attack back from the capital, Kyiv, and other regions. The soldiers will also describe the deplorable treatment to which they were subjected under Russian captivity.

Why: The soldiers are on a U.S. tour to raise awareness about Ukrainians’ sacrifices in defending their homes and democracy against Russia’s tyranny. They are also asking for help to support wounded soldiers and to address the inhumane treatment of Ukraine’s thousands of POWs. Under the Geneva Convention, POWs are to be treated humanely, and any abuse is a war crime. At the same time, they are fundraising to support the families of wounded and killed POWs.

Monday, October 3, 2022 – 6:30 pm
Forum “Conflict in Ukraine – A POW Perspective” at the University of San Diego, followed by a no-host wine reception at La Gran Terraza at 7:30 pm