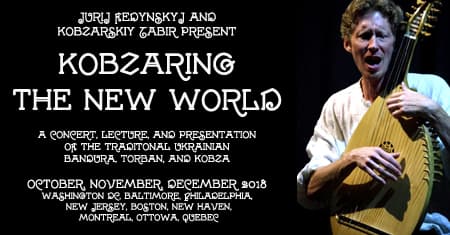 Meet Jurij Fedynskyj – Ukrainian-American Ukrainian. Originally from Raleigh, North Carolina, he has repatriated to Ukraine. For the past twenty years, he has worked to resurrect the traditional kobzar tradition. The kobzari were wandering spiritual singers, who sang to the accompaniment of the kobza or bandura. For the past ten years, he has also worked to revive traditional music making of the torbanists on the Ukrainian baroque lute, called a torban. Both the kobzar and torbanist traditions were completely destroyed by the Sovietization of Ukraine around 1920-1930. The process of reviving such a loss meant researching historic instruments, learning the trade of instrument making, researching the repertoire played on these instruments, and mastering the instrumental and vocal techniques to perform traditonal reconstruction. Jurij presently teaches out of a small village in the Poltava region, Kryachkivka. He conducts private study in making and playing, as well as group folklore camps, and festivals all year round. The present project “Kobzaring the New World” is not a concert tour, but rather a “kobzar tour”, as the traditional kobzars would map out a route of travel, in which they would frequent certain villages and cities, kobzaring for the general public, as well as for particular leaders of the culture. Such was the kobzar’s profession. This tour is an attempt to realize the potential of the kobzars, toward the resurrection of a new Ukrainian nation.

Videos from the event: