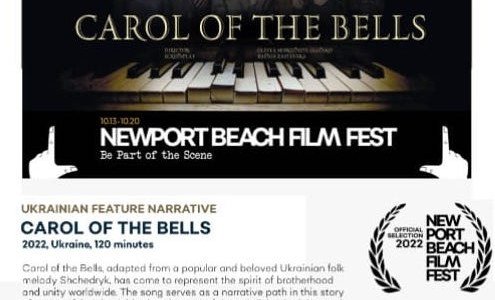 Newport Beach Film Festival presents film Carol of the Bells / ЩЕДРИК.
Immortalized as one of the most scintillating and uplifting Christmas songs, Carol of the Bells, adapted from a popular and beloved Ukrainian folk melody Shchedryk, has come to represent the spirit of brotherhood and unity worldwide. The song serves as a narrative path in this story of a peaceful and neighborly existence of three Polish, Ukrainian, and Jewish families who share a large house, musical evenings, and merriment in the city of Stanislav. Their domestic harmony is shattered first by the Nazi invasion and then by the Soviet occupation of Ukraine. A moving story of courage, sacrifice, and love.